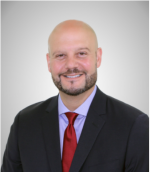 Having spent more than two decades representing the interests of Connecticut businesses before policymakers as well as working directly for the General Assembly early in his career, Eric is well known throughout state government as an effective and experienced leader and advocate. Before joining the IAC, Eric served as the Principal of the Eric George Group, LLC where he provided a wide array of legislative, regulatory and executive lobbying and consulting services to a number of high profile business clients. He also served as chief lobbyist for healthcare related matters and in-house counsel for Connecticut’s largest and most renowned statewide business and industry association. Eric was also an attorney with one of the top law firms in Connecticut, where he practiced in the areas of corporate law, mergers and acquisitions, and municipal finance. As a part of Eric’s involvement with his community, he led one of Hartford’s most renowned and historic membership organizations; has served as an active volunteer with the March of Dimes; has served as a fundraising chair of Camp Courant (which operates a free day camp for underprivileged young people); has served as a member of the Connecticut Judicial Selection Commission; has served as a member of the Connecticut Criminal Justice Commission; and has served as a member of the Glastonbury Board of Education. Eric received both his law and undergraduate degrees from The University of Connecticut.